So, why did you become an anthropologist? The white female early career parent weighs in (Part 1 of 3)

For the American Association of Physical Anthropology meetings this year in Albuquerque, six anthropologists were asked to answer the question: "So, why did YOU become an anthropologist?" in the AAPA Plenary Session. The other participants, who had some amazing and wonderful stories to share, were Kaye Reed, Karen Strier, Mark Zlojutro, Alan Swedlund and Jim Calcagno. Lorena Madrigal organized and chaired the session. I decided to turn my talk into a three-part series for the blog, because I think it's fun to hear the backgrounds of academics, and important to hear where things were hard for us. So here is part one.

* * * * *
I am an Assistant Professor in biological anthropology at the University of Illinois in Urbana-Champaign. I am in my second year there, but took a tenure rollback because of the birth of my child, so really it’s like I’m repeating my freshman year. I wanted to tell the story of not only how I became an anthropologist, but why I persist in being one today.

For me, this breaks down into three questions: 1) Why did I fall in love with anthropology? 2) Why did I pursue academia? And 3) How did I get a freaking job? And of course, I really lied, because there is also a fourth question in the mix here: What am I doing now?

Why did I fall in love with anthropology?

When I was a freshman at Harvard University, I spent a lot of time being angry. I was angry at large lectures, at being an underprepared public school student, at sexism, at feeling like I didn’t particularly belong. I took Science B-29: Human Behavioral Biology to meet a core requirement, but also because it fulfilled a bio requirement I would need if I ended up going into biology like I had been planning when I first got there. My abysmal performance in math and chemistry – prereqs for the bio courses I wanted to take – and my abysmal performance in Expository Writing – which was not easy to swallow since I thought I also wanted to be a writer – had me feeling pretty horrible going into my second semester of college. Then this one class that I thought sounded interesting had 500 students in it and was nicknamed “Sex.” I took B-29 despite my growing concerns about my placement at that university and my ability to do science.

The course was okay. It would have been exceptional to me if I was into behavior, because Professors Marc Hauser and Irven Devore are engaging, interesting and thoughtful speakers. But for most of the class, I only became more convinced that I wasn’t biology material. I didn’t like learning about mating strategies in lizards and felt like my fellow students were making pretty problematic conclusions based off what we were learning. It seemed like I was getting into the kind of problematic, reductionist material that only triggered my righteous sexist anger. If it isn’t obvious already, I do want to be clear that my perceptions of that class were tinted by my experiences as a kid from a poor public school who was having a pretty crappy time in an elite college that didn’t acknowledge her different experience of high school and lack of preparation, and that I was going to be angry about that class even if they had handed us all copies of the Feminine Mystique along with Sex, Evolution and Behavior.

Then, on the last day of class, Irv Devore gave a rousing speech that, to me, was on cultural sexism and its incompatibility with biology. I will never forget how angry he looked when he talked about academic science: the glass ceiling for female academic scientists, he said, is reinforced with concrete. He continued, It is a sad day when a man who has written three books but spent little time with his children is given tenure over an equally talented woman who has produced two but been involved in her family’s life, especially given the nature of the imbalance of physiological investment in parenting. Devore also spoke eloquently about the ridiculousness of laws that prevent women from breastfeeding publicly, when she is only feeding her child, and the wellbeing of her child should not be threatened because we have decided to sexualize breasts.

I don’t know that I can really describe what it was like to have an older man stand in front of five hundred college students and speak so strongly as an ally to women against sexism. I was also amazed and excited by the idea that science could be political, that I could work to eliminate sexism as an anthropologist. I had been invalidated in my anger for so many years, that all I could do in response to this lecture was cry. So cry I did, all the way back to my dorm room, where I proceeded to write the dorkiest letter of my life to Devore, praising his talk, admitting my tears, and proclaiming that I would become a joint Biological Anthropology and Women’s Studies major.

Soon after sending the email – just a day or two later if I remember correctly – Professor Devore called me up on the phone. Mind you, this means he had to look me up in the directory and dial a number to talk to the weepy, dorky girl who had changed her major based on a fifty minute lecture. I nearly fell on the floor when my roommate handed me the phone! He said he appreciated my email, and thought Biological Anthropology was a good major, but that I should skip the Women’s Studies thing because I could just take Women’s Studies classes as electives.

So of course I became a joint major in Biological Anthropology and Women’s Studies. 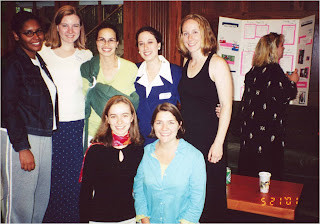 I took some lovely courses in both majors, and having feminist theory on one side, and bio anthro on the other, provided me with the necessary foundation to think well about the meaning behind my work. While an undergrad, despite good training, I was not good at articulating all of this, and yet over the years I have realized that this coursework was essential in my personal and professional development, and I draw from this training every day in my job as an academic. In particular, I had a tutorial in Women’s Studies led by Lauren Korfine (the one wearing her baby in the picture) that provided me with the support I needed to write my honors thesis. My work as an undergrad was probably pretty unremarkable, and my thesis isn’t something I pass around for kicks, but sometimes it’s less about the work you produce and more about the way to learn to think and the relationships you build. It is because of my peers and mentors in both majors that I love anthropology as much as I do today.
Posted by KateClancy at 5:00 PM