So, why did you become an anthropologist? (Part 3 of 3)

This is the third and final part of the series “So, why did you become an anthropologist?” based on the AAPA plenary talk I gave in 2010 alongside many other wonderful and interesting anthropologists (Parts 1 and 2). The question that frames this final part is, How did you get a freaking job?

How did you get a freaking job?

How I survived graduate school
For most of my time in graduate school, I was a union organizer for the Graduate Employees and Students Organization at Yale University. Most semesters the hours I put in were equivalent to a full-time job, sometimes more. My last semester of graduate school I worked full time as expository writing faculty at Harvard. Yet I finished in six years, which was shorter than average in my department. How did I do this?

Well, first, I was lucky enough that my family was able to supply extra funding (like a car and car insurance) that my small stipend couldn’t cover, so I didn’t need to work. I didn’t have any dependents like I do now, unless you count my needy cat. I was and am able-bodied, so the university and surrounding area was set up well for me. And because I didn’t mind the occasional cockroach (well, I minded, but I was willing to tolerate them and several health and safety violations because my apartment was so airy and pretty), I was able to afford living less than a mile from campus.

Then, two things helped me be successful: I worked my ass off, and I had a community of people who were able to contradict the oppression and isolation of graduate school.

I’ll explain the easy part first. There has to be some tiny part of you that is crazily passionate about the work you do in order to be successful in graduate school. If not, you will not put in the necessary hours, you will not feel compelled to go to the library on a Saturday morning, you will not go back into lab in the evening after three hours of house visits and an intense two-hour staff meeting.
But really, that’s the easy part. Because if you’re considering graduate school, you are or shortly will become intensely interested in your discipline, you will think about it all the time, you will read about it just to learn more. Being an academic doesn’t require that this be constant; if anything, I think the more sane and more successful academics I know get periodically exhausted by their jobs and know when to put a project or manuscript down for a while. But you probably do need that occasionally manic buzzing in your ear that makes you spend three extra hours reading up and teaching yourself about inflammosomes when you could be watching an NCIS marathon.

The harder part is finding a way to contradict isolation and oppression. I think we need to be honest with ourselves that graduate school is incredibly oppressive, not necessarily by individuals, but certainly as a system. I don’t think I need to explain myself here, but if you are not in academia, as one example, find a graduate student and talk to her before and after her qualifying exams. Her feelings of isolation, stupidity, confusion, anger, self-blame will be incredibly high in your first interview compared to your second! And this is independent of the bread-and-butter issues that also promote stress during graduate school, like pay and benefits. 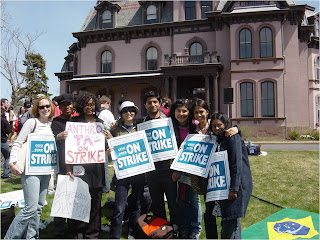 Being in GESO made me part of a collective of women and men that were able to identify the source of their oppression as external – the system of higher education – rather than internal. Not blaming yourself for feeling crazy all the time goes a long way towards feeling better during graduate school. Being a union organizer also meant I was creating social change on a daily basis. I got people to join the union, sometimes after months of conversations, and many of these people became lifelong friends. I helped write reports that showed the university’s true commitments to gender equality and other issues. I was arrested in civil disobedience and I went on strike, two times each. These were personally meaningful moments just as much as they contributed positively to the climate at Yale.

To me, being part of a movement to change the system of higher education is a necessary component of graduate school. This isn’t just selfishly to find friends to help you through graduate school and it’s not playing at union organizing. It is serious, it is real, and it is how we start our stewardship of higher education. If you are going to be an academic, you need to understand the workings and failings of academia, and you need to have experience working to improve it. Otherwise, the feelings of powerlessness that one can feel over qualifying exams, grantwriting, dissertation research, mentor relationships and the job market can overwhelm.

Myths and meritocracies
Academia is not a meritocracy. There, I said it! Many of the best scholars and intellectuals I have known quit graduate school, or left academia after getting a PhD. Many other excellent academics took years to find the magical tenure-track job. Still others are still looking. I think that many excellent scholars do tend to eventually find a home in academia, but I am also saying that while sitting comfortably in a tenure-track position at an R1 institution.

Academia is not a meritocracy. Racism, sexism and classism, to name just a few, still run rampant. A lot of this is built into the institution: for instance, many places are improving their recruitment of people of color, but are still poor at retention. On-site childcare that is nonexistent or has too few slots is a disincentive for people with dependents or those who shoulder a greater proportion of childcare; these tend to be women. Departmental culture can discourage people from varying backgrounds to express themselves, or even survive in that world: I know male faculty who feel they can’t express themselves as parents in their departments because the other fathers work all the time and never see their children. I know a woman who quit graduate school in the physical sciences because of objectionable images of women plastered in the halls to advertise social events in her department; her work to have the images taken down ended in a meeting with a Dean who told her she was ruining her career by speaking up.

Academia is not a meritocracy. I am a spousal hire. I know that some people view spousal hires as second class citizens (I also know that those people don’t happen to reside in my department). I think this view originates in the fact that we want to believe academia is a meritocracy and that only the best get in, and that somehow dual hires get around that. There are two problems with this: first, spousal hires do not get around meritocracy, because they are as rigorously evaluated as other hires and are rejected as often as accepted (at least at R1s; I do know occasionally this happens differently at other types of institutions). The other dual hires I know on this campus are inspiring, intelligent, and major players in their departments. Second, since the idea of a meritocracy is a myth anyway, it is silly to pick on one group of people when we are all struggling to find work in the discipline we love.

The idea that academia is a meritocracy is a myth that keeps people who have not been successful in finishing their degrees/finding jobs/getting tenure/etc from speaking up about larger inequalities and issues in higher education. It’s time we discarded this in favor of an honest appraisal of what is wonderful and problematic about academia. 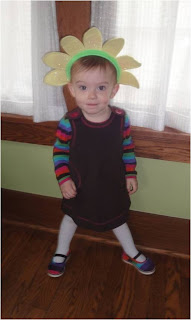 I finished my degree, then spent a year as a faculty preceptor at Harvard University teaching expository writing (that is a grueling job to cut your teaching chops, but has good pay, benefits and job security). Then I had a baby and a semester of maternity leave (sort of, but we’ll leave FMLA gripes for another day), then in the fall of 2008 moved to Illinois to begin my position here with a five month old in tow and only twenty hours a week of childcare because it was so hard to come by. We wouldn’t get to full time childcare until the beginning of my second year. This meant even less sleep than usual for young parents, as my husband and I had to work nights and weekends to make up for the childcare deficit.

In my work, I take a holistic approach to ecology and women’s reproductive functioning. While my dissertation was on the endometrium and that is still a major interest, some of the mechanisms for variation in endometrial functioning, and a little navel gazing from my experience of pregnancy and a recent diagnosis of gluten intolerance, led me towards immune health and inflammation. I have a few projects nearing completion (if you were at the AAPAs/HBAs and saw my talks you heard about one of them on ovarian follicular waves) and a few others in the mix (a departure from my human snobbery to work with mice?!).

All criticism of the system of higher education aside, and all paperwork and bureaucracy and grading and meetings aside, this is the most stimulating, interesting and fun job I could have ever hoped to have. I get to spend my day using my mind, interrogating ideas, and learning new things. If I have an idea for a project, it’s on me to do the legwork and on me if it fails… but how cool is it that I get to go after the idea in the first place? I love that if I get excited about something, I can explore it further. I can do a literature review, or write a grant, or find a collaborator in another discipline. One of my most interesting collaborations so far came from emailing the authors of an article I found interesting out of the blue.

I can teach women that what they learned about their bodies was reductive, that they aren’t diseased simply by being female. I can mentor undergraduates and graduates, make them critical thinkers, and help them get grants and get jobs and get into graduate school. I can work with non-science majors and make them less afraid of science. I can promote different kinds of pedagogy and increase access to education using online learning technologies.

Folks, I have drunk the kool-aid. This is a great job. But I don’t want to keep it to myself; I want more people to have access to academia and secure jobs and to just having a more intellectual life. That is why the institution and culture of higher education needs to change, and why I become an academic anthropologist. I like to think about women, I like to think about biology and medicine, but I also like to share my excitement. I hope you’ll join me in working towards positive change so that anthropology can continue to grow and have a positive influence on society.
Posted by KateClancy at 10:04 AM